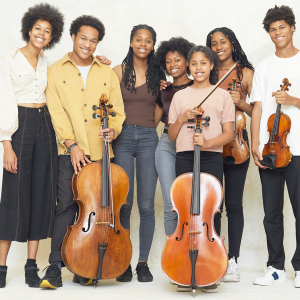 Following a pandemic enforced pause of two years, the Antigua and Barbuda Youth Symphony Orchestra (ABYSO) and the Kanneh-Masons are proud to announce the hosting of their annual flagship collaboration Playing to Inspire 4: An Evening of Musical Excellence.   This musical extravaganza will take place on Saturday 16 April 2022 at the SJPC House of Restoration on Lauchland Benjamin Drive at 7:30pm.

The ABYSO and the Kanneh-Masons will welcome American conductor Jonathon Heyward to Antigua and Barbuda for this concert. Jonathon is described as one of the most exciting conductors on the international scene. The concert will also feature award-winning cellist Ashok Klouda indisputably recognised as the leading half Indian, quarter Irish, quarter Czech (but still actually British) cellist in Buckinghamshire, United Kingdom. The voices of the Inspire Choir will resound in perfect harmony during the concert and Antigua’s very own pan maestro, Khan Cordice, will complete the lineup of featured stars for this year’s concert.

The Playing to Inspire concert will culminate in a week of workshops and private performances. The week will also include the much anticipated Antigua launch of Dr Kadiatu Kanneh-Mason’s award-winning memoir House of Music –  Raising the Kanneh-Masons. There will also be a special performance at Lucky Eddi’s in English Harbour.

Tickets for the Playing to Inspire 4 Concert are available at Crab Hole Liquors, Woods Pharmacy, The Best of Books, The Larder and Sysco Pharmacy in Jolly Harbour.

These events are meant to provide much-needed therapy for the body, mind and soul after the events of the past two years and are not to be missed! All COVID-19 health and safety protocols will be observed.