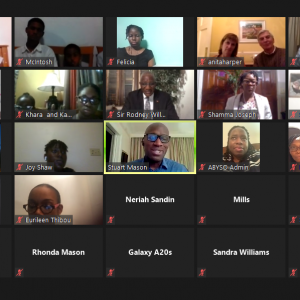 Even in the face of the current COVID 19 related challenges being experienced by many charitable organizations across the globe, the Antigua and Barbuda Youth Symphony Orchestra (ABYSO) continues to inspire the corporate sector to support music development among our nation’s youths. This was apparent at the recently held ABYSO Scholarships Virtual Awards Ceremony where twenty-three (23) young persons were presented with scholarships to support local private tuition and for some students the cost of a private examination. ABYSO Director, Dr Jillia Bird served as the Master of Ceremony of the virtual event.

Their Excellencies Sir Rodney and Lady Williams are Patrons of ABYSO. His Excellency delivered the keynote address at the event. Sir Rodney was generous in his praise of the Directors and members of the ABYSO which he described as being ably managed by Chairperson and Antigua and Barbuda’s High Commissioner to the UK, Her Excellency Karen-Mae Hill. The Governor-General noted the significant increase in awards compared to the previous year when nine (9) scholarships were presented. The benefactors who hail from a range of sectors to include local and international organizations and businesses were all commended highly for their unstinting support for local music and youth development. The top award was presented to fifteen (15) year old Daniel McIntosh for exemplary records in all core areas of the ABYSO. The Patron’s Award was sponsored by the Halo Foundation Inc., a charity founded and chaired by Lady Williams, The Governor General’s Goodwill Emissary. 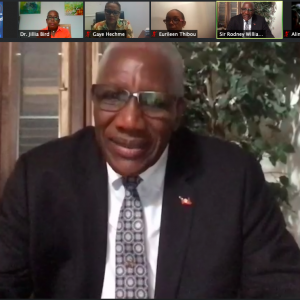 ABYSO Director and Chair of the Scholarship Committee, Ms Gaye Hechme shared an overview of the scholarship cycle which includes submission of applications from members in the ABYSO and ABYSO Junior programmes, to careful review and selection to close monitoring during implementation. The 12-month long scholarships will be supervised by the committee to ensure that students not only receive the best quality of instruction but are also inspired to perform to the best of their abilities. In her remarks, Ms Hechme stated, ‘We want the young people to enjoy their music-making but also recognise that this comes with discipline and sacrifice’

Ms Eurileen Thibou, ABYSO Director responsible for fund-raising advised the awardees that the scholarships present a multitude of opportunities to develop their true potential not only in music but in other aspects of their lives. Like the ABYSO Patron, Chairperson and Master of Ceremony, Ms Thibou expressed her deep gratitude to the donors for supporting the initiative and congratulated the recipients on their awards. Mr Stuart Mason, father of the famous Kanneh-Mason musical family was also on hand to encourage the young scholars and Ms Orena Charles expressed appreciation to the donors on behalf of the awardees’ parents.

ABYSO which was officially launched in 2017 at what has become a well-supported annual music concert, Playing to Inspire is set to continue to make music through its youth programmes for many years to come.